It's been a long time since I had a big announcement. No new writing to publish... but I did make a thing! The Biden Time app is now available for Android and iOS. (I did the development for the Android version.) 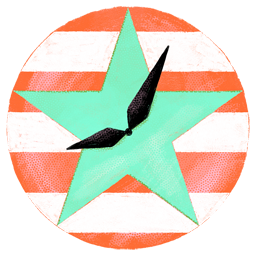 A little over a month ago, my friend Shawn Simmons had an idea for a light-hearted patriotic app that would count down the days of January until Inauguration Day with a daily illustrated quote about democracy. I told her it sounded easy: I could build the Android app, and maybe I could recruit my buddy Nathan Loring to make the iOS version. She figured her friend Adam Setala might be interested in doing the illustrations. Shawn and Adam are professors at the Milwaukee Institute of Art & Design, and have worked together for years. And Nate and I have been writing software together off-and-on for something like eighteen years. The four of us had a virtual meeting, talked it over, and decided to give it a go!
It's a pretty simple app, inspired by Advent calendars (Shawn LOVES Advent calendars). Each day, January 1 through 20, another door becomes available to open, and tapping it reveals a new illustration. From there, you can share the illustration and view our merch on Redbubble. (Shawn's going to be updating our store each day to add the new illustration, so you can't accidentally spoil your own surprise by seeing future days before their time.) On certain days, we'll also be highlighting a relevant cause, with a link out to donate.
Now, after a good deal more work than we anticipated (surprise, surprise)... it's ready to go! We even have ten days to spare!

Biden Time is a free app. Sound interesting? Install it now to be ready for the countdown's Jan 1 start! Available for Android and iOS.